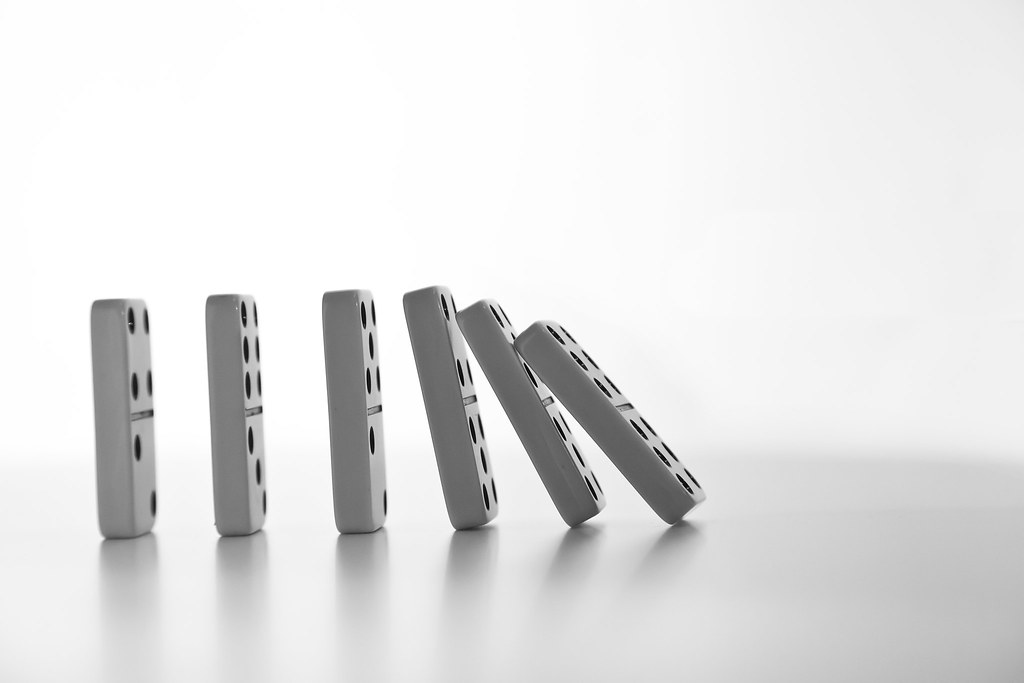 Not that I assume any of you “keep up” with what I’m writing on here or on social media, but if you happen to be one who does, then you have seen in recent days (a) that I’m incredibly frustrated with a pastor named Richard Lowell Bryant and his article, “There Is No Such Thing as the Trinity,” and (b) that I think the Trinity is important.

[Side note: anything I say on these matters that is truthful or right is not original to me. Rather, it is much more ancient. If I say anything that is original, then it’s likely untrue. I’m more than willing to admit that I might misconstrue some of this. Feel free to correct/challenge me, if so.]

When I was younger (O.K., I’ll admit it: even now that I’m older), I loved stacking up dominoes and tapping one over and watching the whole row fall. Since the advent of YouTube, my experiments have been shown to be amateur. Go to YouTube and search “dominoes,” and you’ll see some highly creative, expanded versions of what I did as a child. Ah-mazing. Far more complicated, but those projects are built on the same logic: if you knock over one domino, you set in motion the collapse of all the dominoes. They inevitably lead in a certain direction.

As a way of responding to both of the matters I mentioned above, I want to suggest that trusting Jesus is such a domino, and by tapping that first domino, the path leads to what Christians have called Trinity. This is important because for many Christians, the Trinity seems like an extra, take-it-or-leave-it matter. Even for those who wish to think about it, they might find themselves confused or unable to see why it’s relevant. Understandably, they think the focus should move elsewhere.

But this is not the case. As I said recently, the Trinity changes everything.

I said above that trusting Jesus is the first domino. Let me explain that. I have known many people who look, more or less, to Jesus as a positive figure. Some declare him God and Savior, others applaud him as a kind and loving man who led a revolution. Let’s say you’re one of these people, that you come to place a certain level of trust in Jesus — or at least in the “Jesus” you come up with in your mind, wherever that Jesus might come from. If you’re being honest and generous at that point, then you’ll have to inquire, “Who is this Jesus?” If you wish not to be honest and generous, then you very well might, at this point, decide that Jesus will be whoever you want him to be. He can be a communist, he can be a capitalist, he can be your grandma giving you cookies and soda, he can be the angry guy with fire in his eyes, ready to smite. Doesn’t matter. You get to pick.

If, however, you wish to keep following the dominoes, then you’ll have several important steps to take. You’ll have to ask, “Who is even telling me about Jesus?” This is important because who is telling you will influence why they are telling you — and how trustworthy their purposes are. If you’re talking to a Roman soldier from, like, the year 35 C.E. (or A.D., whichever you prefer), then you might hear, “Jesus? No idea.” Or you might hear, “Apparently he was one of the many guys we crucified on a cross, but his crazy followers made up a story about him becoming alive again.” If you trust in this Jesus, then he’s not necessarily a positive or influential figure for you. I don’t know what you’re actually trusting in, at that point.

In all likelihood, most people who even know about Jesus today do so because of the Christian church. The church — through its Bible, through its worship, through its stories — tells you who Jesus is, from their perspective. And if you trust in a positive version of Jesus, then you’re depending on their perspective, as they  have tried to convince you he’s a positive figure worthy of trust.

Here’s one of the reasons why that’s important. Let’s say you’ve read some story from one of the Gospels, and you’re like, “Wow, Jesus is amazing! I like that guy!” But then, you see something else you do not like — maybe elsewhere in the Bible, maybe in the church. You think, “Now that I do not like.” At this point, you might think that you can simply pick the part you like and be on your way. But here’s the thing: the part of Jesus you like belongs to the book that says something you do not like that was put together by the church that is doing things that you don’t like. So on what grounds can you pick only part of what you hear? Why trust any of it? If you trust part, then you must be open to trusting the whole. If you reject part, then you should be willing to reject the whole, since it’s all tainted by this group.

Let me try to give an analogy. Let’s say you go to the doctor. You have a sore throat. The doctor checks your throat out, and then he declares, “O.K., it appears that you have a broken foot.” You think, “What sort of crazy person are you?” You might demand that he explain; you might just check out, thinking that he doesn’t know what he’s talking about. After that, though, let’s imagine he proceeds to share other “medical” advice with you, all based on the fact that you have a broken foot. It no longer matters how sound the rest of the advice he shares might seem, you are inclined to distrust him, because he’s convinced you that he’s not trustworthy. You would need further reason to gain that trust back before you believed him, and even then you would need some explanation for why he blamed your sore throat on your broken foot. Maybe those things can happen. But until they do, you are inclined not to trust any of what he says because you have distrusted part of what he says.

If you distrust part of the Bible or the church itself, for whatever reason, then logical consistency would demand that you distrust anything that the church tells you. If you wish to trust in an alternative Jesus, then you will need an alternative ground to stand on. If you wish to trust parts of Jesus as revealed by this group, then you will need to be open to trusting all of what this group has presented to you.

I am convinced that any attempt — “conservative” or “liberal” — to pick and choose regarding Jesus is harmful and wrong. But I am most surprised at the irony of the way in which certain folk, like the pastor I cited above, find a social-justice, communist, let’s-just-love-everybody Jesus and reject something like the Trinity. They can only get to this Jesus by first making him into their own image, while completely disregarding important dimensions of who Jesus is.